The 14th Dragoons, known as Dormer’s Dragoons, was raised in 1715 and fought in both Jacobite Rebellions of 1715 and 1745. From 1747 they spent the next 48 years in Ireland, from which they became known as an Irish regiment. In 1756 a Military Lodge was warranted by the Grand Lodge of Ireland and was officially the 14th Dragoons Lodge No. 273. The 14th was the second dragoon regiment to be converted, in 1776, from dragoons to light dragoons. The men and horses were expected to be smaller, between 5ft 5.5ins and 5ft 9ins for the men, and 14.3 and 15.1 hands for the horses, of ‘the nag or hunter kind’. They were later known as the 14th Hussars. and in 1922 amalgamated with the 20th Hussars to become the 14/20 Kings Hussars. Malta Masons – Freemasonry in Malta More information . . . .

We have taken on a couple of charitable events over the last couple of years.

This year, the lodge in collusion with De Rohan Lodge, raised €1,450.00 for the MS Association. A pig roast was held in Buggiba and a wonderful evening was had by all. More Information . . .

In 2013, the lodge brought two soldiers, both guardsmen, who were injured while on active duty in Iraq and Afghanistan. They were given the chance to relax and enjoy the island and also attended the November 11th Remembrance parade. 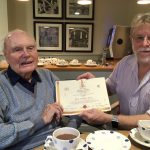 In November last year, the brethren of Abercorn Lodge welcomed a new Honorary member into our midst. View the blog